The Oregon Coast is famous for its scenic beauty and quaint towns so we had high expectations when setting off to Tillamook.

We were not disappointed! Even the heavy overcast skies and low temperatures could not dim our enthusiasm. In fact, those weather conditions actually added an extra quality to our shots which we really appreciated.

We stopped practically every few miles to see what we could shoot. I think we visited every scenic lookout or car parking along the stretch of Hwy 101 between Newport and Tillamook.

An interesting spot we found quite by accident (those are always the best discoveries!) is the Devil’s Punchbowl.

If you look carefully, you can see two openings down there, allowing the sea water to rush in during storms. In severe weather, water from the ocean slams with a thundering roar into the bowl churning and foaming. You can see how the water was carved out a huge bowl-shaped hole.

Every time we stopped somewhere, we could not help but observe plants and flowers we had never seen before. Here are a few examples of these, quite beautiful, flowering plants, seen everywhere. 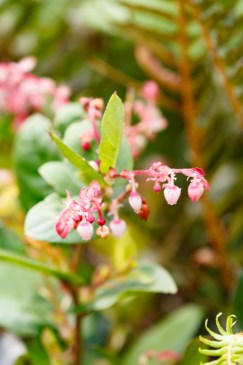 In addition to these beautiful flowers, we could not believe the amount of Flowering Broom. It was everywhere, in beautiful vibrant yellow.

When we checked into the RV Park, the map of the park they gave us had a little note not to use driftwood in campfires anywhere in the RV Park. We found this a bit strange as we saw mountains of driftwood on virtually every beach we passed. Checking into this a bit further we found out why. Burning driftwood gives off toxic fumes!

Driftwood is saturated with salt from the ocean and when it burns, it gives off a pretty blue/purple colored flame, but the smoke contains a chemical called Dioxin which is carcinogenic. Dioxin is referred to as a persistent, bioaccumulating toxin, meaning it doesn’t decompose, and it builds up in the tissues of the organisms that ingest it. Specifically it can concentrate in mother’s milk. It has been associated with various cancers.

This was a major surprise to us as we had no idea. We do now and will stay well away from bon-fires on the beach that are fueled by driftwood.