I will admit to not knowing this . . . but you need a non-commercial Class B driver’s license in California for motorhomes 40ft or larger. Considering that ours is 42ft long, we now realize we drove it illegally for about 9 months.

I am now “legal” of course, but getting this license was not as straight forward as one would think. Not because it is hard, but because so few people know anything about it and that, sadly, includes the DMV itself.

Let me elaborate and hopefully, this post will help anyone who might have doubts or finds themselves in the same boat.

When we first purchased the motorhome, we actually asked the local DMV office if any special license was required. They informed me that “no” motorhomes could be driven with the regular Class C license. Granted, I did not tell them the size of the motorhome, but they never asked me to elaborate. In hindsight, this was the first indication that the local office had no idea.

As we started travelling with the motorhome, we would occasionally hear murmurs of needing that class B license so I eventually looked it up. Sure enough, this page on the website of the California Department of Motor Vehicles, states it quite clearly – “any housecar over 40’ but not over 45’”.

Further investigation revealed that I would need to sit a written test AND complete a “behind the wheel” test, driving the actual motorhome itself. The full list of requirements is listed here.

So I called the DMV to start the process. These days, the DMV has a central 1-800 number that you call. As I live in Woodland, CA (a town near Sacramento), I asked if I could do the test locally and was told that the driving test had to be done at the “Commercial Driving Test Center”, or CDTC, in West Sacramento, but that I could do the written test locally at the Woodland office. Little did I know at the time, that this was a major mistake.

I showed up for my appointment on time and filled out the form they handed me. I ticked off the box stating I was there for a Non-Commercial Class B license. Please take a moment to note that the form they handed me (and which they hand to EVERYONE walking into the door), actually has a box to tick for that type of license! When I handed the form back, I could see the guy hesitate as his eye caught that ticked box. Eventhough his surprise was obvious, it was clearly not his problem as he referred me to another window. This is where the confusion really set in.

The girl took one glance and went “oh . . . .” then started to click through page after page on her computer. After a few minutes, she excused herself and went to get a co-worker. The interrogation of the computer continued. Some more time passed after which the girl looked at me and said “I’ve never done a non-commercial class B”, then went to get her supervisor.

She came, did her share of searching the computer, then asked me what I needed this license for. “Oh . . . a motorhome, you don’t need that, a class C license is fine”. I assured her I did need that. More questions about what I was going to do, constantly ignoring my statement that this applied because of the length of the vehicle. Then, when she learned that I would be towing a car behind the motorhome, a light seemed to go off. After consulting the computer a bit more AND getting no-less that TWO more people involved, I was told I needed, not a class B, but a Non-Commercial Class A license, because I would be towing. I was not convinced, but figured that a Class A would cover all the requirements of a Class B, so I did the test and . . . passed. After seeing a 6th person that morning, I left the office with a Non-Commercial Class A permit. While still somewhat annoyed at having to deal with SIX different people, I was pleased with myself. Now for the driving test itself, which had to be at the CDTC in West Sacramento, about a 45 minuted drive away.

The FIRST thing I was told after checking in was “you don’t need a Class A, you need a non-commercial Class B license”. Oh boy . . .

This spurned off more computer work, new fingerprint recording, a new photo taken and another signature. Now I had a Class B permit and the testing could begin, or so I thought. There was a drip from my transmission cooling tank which meant a deferral.

After having the leak dealt with by the local Catepillar dealer, it was back to the CDTC for the driving test, this time with out the tow vehicle as that was NOT required for the Class B test. My neighbour was once again, happy to come along.

The safety check for a Class A is extensive, but for the non commercial class B, it turned out to be little more than “here is how you would do a safety check” rundown by the guy who tested me. Whew . . .

The skills test portion involves backing up with the motorhome. There were 3 skills tests.

First off was the “Straight Line Backup” which merely required you to back up the motorhome in a straight line. Considering there is no trailer involved, this was pretty easy.

The second skill was a little harder, the “Offset Backup” which required you to backup into a space, not directly behind the motorhome. A little tricky, but very doable.

The third test, the hardest one, was backing into a space at a 90 degree angle. 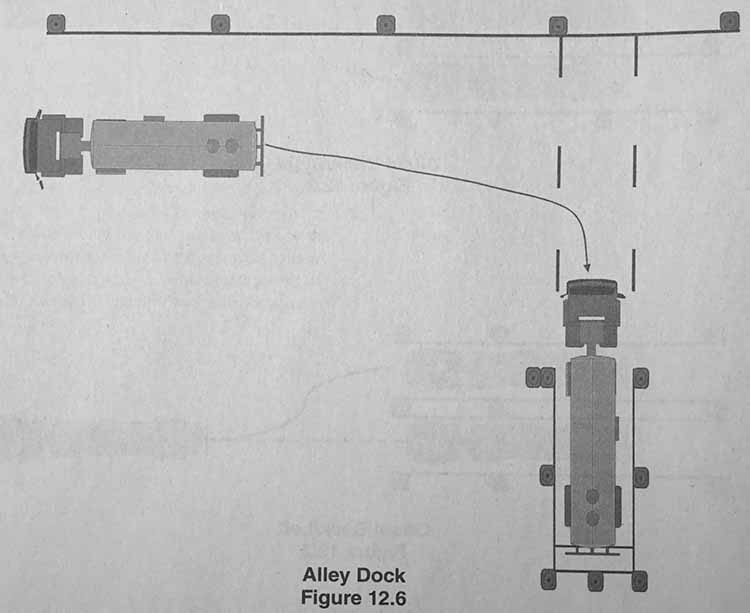 Thankfully, I had practised this a few days prior with my lovely wife pushing me hard to perfect this manouver, something that proved extremely valuable, as I aced all three tests.

After this was the road portion which was not too challenging, after all, I had been driving this 42ft monster for at least 9 months already. I passed the test and I am now the proud owner of a Non-Commercial Class B driver’s license. I am “legal” at last!

There are a few lessons to take away from all this. In summary, they are: