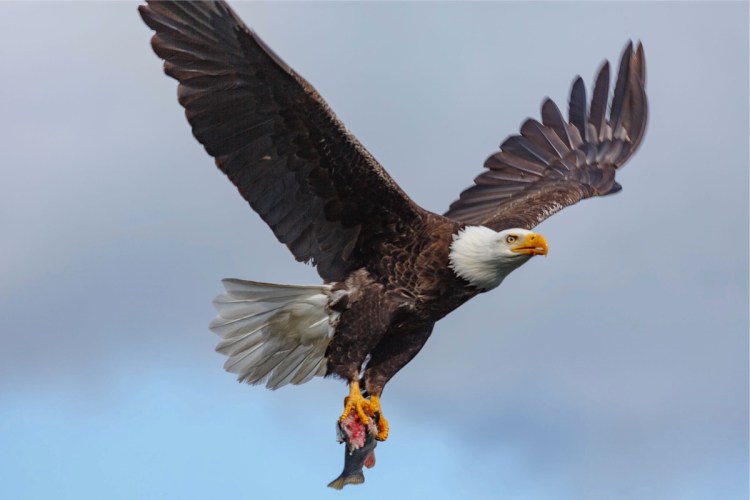 We are camped along the Indian Creek (see Linda’s post), which runs into the Rogue River, a river known for its salmon runs and rugged scenery. It is one of the original eight rivers named in the Wild and Scenic Rivers Act of 1968 which preserves rivers’ and sections of rivers’ free-flowing condition. In other words, the rivers covered in the Act are not allowed to be dammed or otherwise impeded.

No surprise then that this area is beautiful and a popular destination for salmon fishing. In fact, a fellow camper proudly informed us that he had caught a 22 pound Chinnook salmon, just a few hundred feet from the campsite.

So, with cameras in tow, we set off to see what we could find, traveling along the south bank of the river. We drove onto this “beach” to get close to the river and get a feel of the surrounding scenery, which you can see here is beautiful. We later passed over that bridge you can see.

A nearby plaque explained how hundreds of thousands of salmon pass under that bridge every year, all of them doing it twice in their lifetime, once as juveniles, heading out to sea and once as adults, heading upstream to spawn. Needless to say, all this fish has attracted all sorts of fishing activities over the year and the Port of Gold Beach, the town where the river flows into the Pacific ocean has a rich history of commercial fishing. There is a partially sunken boat in the harbor (called the Mary D. Hume) left there as a monument to the glory days of commercial fishing in the area.

However, I digress, as the point that I want to make is that man is not the only species attracted to the fish in this river. We learned that Osprey nest in the area as they are fish-eating birds. We also leanred that the occasional Bald Eagle can be spotted in the area. When we drove onto that bridge mentioned earlier, we spotted about a dozen Ospreys soaring over the water and saw a bunch more perched on a rocky outcrop. Excited, we mounted our long lenses on the cameras and went for a walk hoping to catch a few shots of these birds of prey.

To our amazement and delight, we spotted a Bald Eagle sitting in a tree with a freshly caught fish. This was our first ever sighting of a Bald Eagle in wild! While Linda believes she briefly saw one just a few days before, she was not sure so we were both extremely thrilled with this sighting.

These Rogue River Bald Eagles are so majestic and powerful looking. The Bald Eagle is unique to North America and not only has become our National Bird, the Bald Eagle is also featured on the “Great Seal of the United States”. By the way, the birds are not actually bald. It turns out the term “bald” used to mean “white headed” at some time in the past and the name stuck, even though the term “bald” has taken on a different meaning.

What a treat to see such a majestic bird in the wild! We are told that half of all of the Bald Eagles are found in Alaska, so we are fully expecting to get more pictures of this magnificent bird in the near future, but so thrilled to have spotted this one so early on in our trip!