In my previous post I mentioned that I had never seen a barrel race event live. That was not lost on Linda who promptly started to look for a rodeo after we settled into our RV Park in Columbia Falls in Montana. She reasoned that, of all the US States, Montana would be a perfect location to go see a Rodeo!

I should state upfront that Linda is against the way the animals are treated. She finds is all extremely cruel. However, she wanted me, an ex-Dutchman, to see a real Rodeo in person so she found a rodeo in the town of Eureka, about an hour drive north of Columbia Falls, almost on the border with Canada. It certainly was perfect location. Set in the midst of “horse country”, the area is dotted with ranches and, mountain enclosed plains full of grazing cattle.

The event started at 8pm so we knew we’d be shooting in the dark. You should know that the lights in a stadium might be just fine for the human eye, for a camera, not so much. For an event like that, you want to “freeze the action” by using fast shutter speeds and for that, you need a lot of light. Anyway, I digress.

The event, as big an event this appeared to be for locals, was decidedly “low key” for city folk like ourselves. No parking attendants (nor a parking fee), just park your car where you thought it would be good. No secure box office for tickets, just a lady at a folding table with a sack of money. The entrance “ticket” was a rubber stamp on your hand. Regardless, we had a blast at this event. For me, it was something completely new. I had only even seen snippets of a rodeo on TV so actually being there, seeing it for real was quite something different. You can really see the effort and skills and there is clearly a lot of experience (and nerve) required. Pretty awesome.

There were multiple events and I later learned that this is how a rodeo is set-up.

This was a fun start to the evening. Small kids, we guessed somewhere between the ages of 3 to 6 or 7, would ride a sheep. In most cases, the dad would run alongside the sheep and grab his child before he fell off. Some kids did amazingly well and would proudly raise their arms in victory at the end, like they see their dads do, receiving loud cheers from the crowds.

There are strict rules – the rider must have both spurs touching the horse’s shoulders until the horse’s feet hit the ground after the initial move from the chute. If the cowboy fails to do this, he is disqualified. 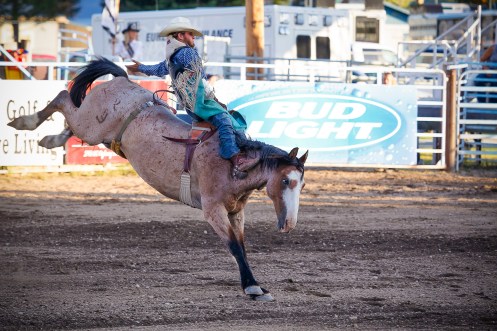 This is perhaps the most “classic” of the events and demands style, grace and precise timing.

It is pretty clear this evolved from the task of breaking and training horses to work the cattle ranches of the Old West.

Similar to bare back bronc riding, the saddle bronc rider must have both heels touching the animal above the point of its shoulders when it makes its first jump from the chute. If the rider misses his mark, he receives no score.

The saddle bronc rider has only a thick rein to hold onto. The rein is attached to the horse’s halter. He can only use one hand , if he touches any part of the horse or his own body with his free hand, he is disqualified.

The bulldogger is assisted by a second rider, called the hazer, who rides along the steer’s right to keep the animal running straight. 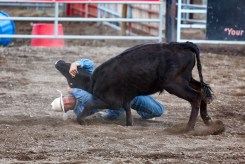 You can really see this event can be traced back to the working ranches of the Old West.

What really impressed me is that the horse needs to be highly trained. When the cowboy throws his loop and catches the calf, he immediately dismounts, sprints to the calf and throws it by hand, a maneuver called flanking. While he sprints to the calf, his horse must pull back hard enough to eliminate any slack in the rope, but not so hard as to drag the calf.

When the cowboy finishes tying the calf, he throws his hands in the air to indicate he is done and the timer is stopped. He must then remount his horse and ride forward just enough to create slack in the rope. Then waits six seconds to see if the calf remains tied. Only then is he awarded the time. If the calf frees itself and gets up, the cowboy receives no time. 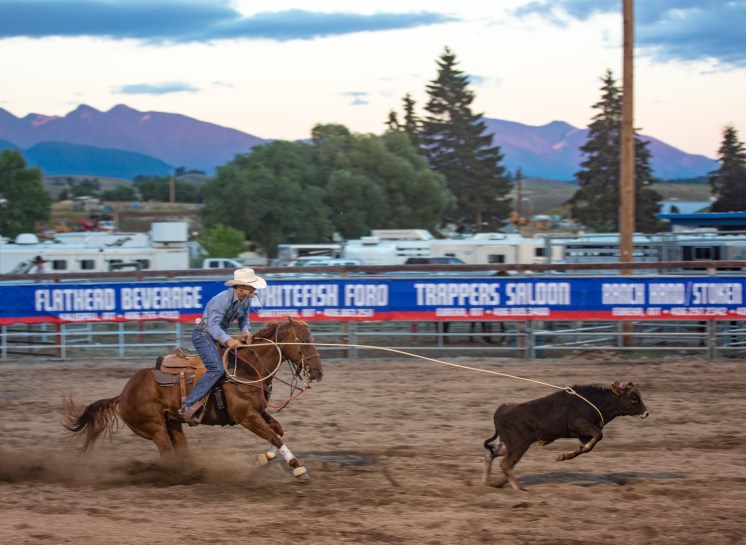 Barrel racing is a cowgirl event and is only judged on time.

The cowgirl enters the arena and passes an electronic “eye” which starts the timer. She then rides the horse as fast as she can around a cloverleaf-shaped course of three barrels. When complete, she races past the electronic eye again, which stops the timer. That timer is the one and only judge, but if she knocks over a barrel, she receives a 5 second penalty. The event is timed to the hundredth of a second, so a 5 second penalty is massive, pretty much assuring no placement. 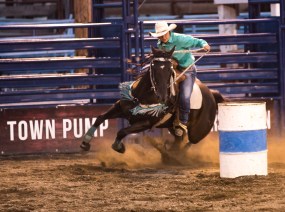 Team roping is the only team event in Rodeo. It involves two cowboys (called a header and a heeler) and originated back when cowboys needed to treat or brand large steers and the task proved too difficult for one man.

After the steer is released, the header casts his rope first. There are only three catches that are considered legal: around both horns, around one horn and the head or around the neck. Any other catch is considered illegal and the team is disqualified.

After the header makes his catch, he exposes the steer’s hind legs to the heeler who throws his rope around the hind legs. If he catches only one foot, the team is assessed a five-second penalty.

When both cowboys have successfully caught the steer and backed up their horses so there is no slack in their ropes, the timer is stopped. 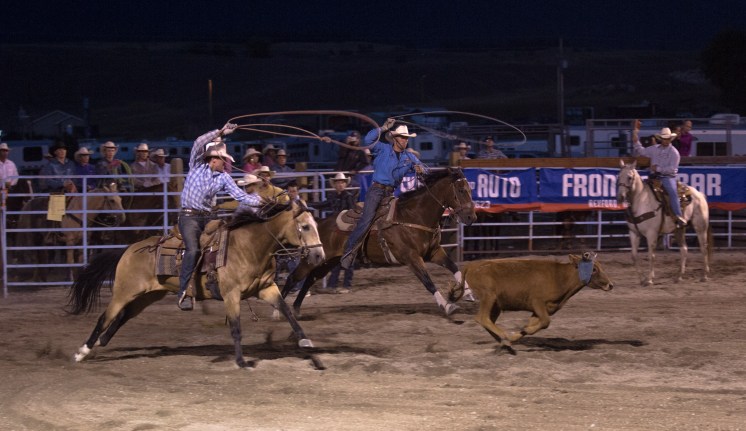 Bull riding was clearly the most popular event and was saved for last. This is a 2000 pound animal and it is very obvious this is a dangerous sport. While very exciting, it demands intense physical prowess, mental toughness and courage.

Bull Riders are solely judged on their ability to stay aboard the twisting, bucking mass of muscle. 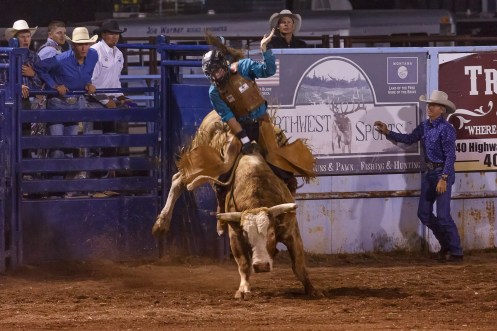 As stated at the beginning of this post, Linda finds Rodeos to be cruel. Now that I have seen one, I cannot help but agree. While regulations demand a vet to be present and that a steers’s horns must be wrapped, those measures hardly reduce the pain or risk or injury. The calfs and steers are yanked about with great force. Getting the broncos and bulls to buck is even worse.

While horses and bulls will naturally buck and kick to get this weight (the rider) off their back, we could clearly see a guy yank a strap with all his might as the animal leaves the gate. You can see that in the picture below – just look at the guy with the black hat in the middle of the picture.

Having said this, we totally get that Rodeo is a huge part of the lifestyle and culture in states like Texas, Wyoming, Montana and others and the skills and agility of these cowboys and cowgirls were absolutely amazing. Thank you Montana.