You may never have heard of him, but he was one of California’s “Authentic Characters” . . . with an obsession. I am referring to Leonard Knight, the creator of “Salvation Mountain”.

You’ll find Salvation Mountain about 4 miles inland, Southeast of the Salton Sea, right in the middle of the desert. Don’t worry, you can’t miss it as the “mountain” is painted bright blue and pink and dominates the country side. If fact, you’ll be able to spot it a mile away.

The “mountain” is (as Aaron Huey from National Geographic so aptly described) a literal man-made mountain, 28 years in the making, covered in half a million gallons of latex paint. What started as a small monument made of dirt and painted cement became, over time, a sprawling adobe clay and hay-bale mountain complex, with peripheral structures made of telephone poles, tires, and car windows, as well as art cars and sculptures, all painted in a patchwork of stripes and color blocks of whatever color paint was donated that week.

The “man” in this description is Leonard Knight, a man who found God at age 36 and wanted to tell the world about Him. After a failed attempt to do so with a balloon, he settled in the Southern California desert (living in an old truck without water, electricity or services) and built Salvation Mountain as a lasting monument for all to see. From its Sea of Galilee at the bottom, to the big red heart in the middle, to the cross at the very top, the recurring theme of “God” and “Love is everywhere” at Salvation Mountain. 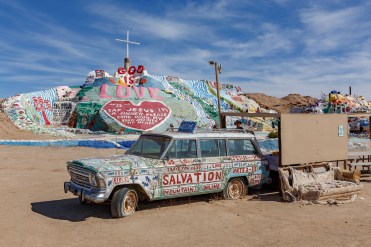 Salvation Mountain with the “visitor’s center” in the foreground 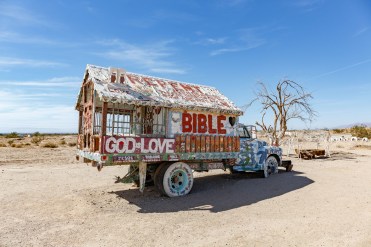 Leonard Knight’s truck he lived in while making Salvation Mountain

We first heard about the Mountain while staying at an RV park called the “Emerald Desert RV Resort”, just south of Palm Springs and and were intrigued… The initial description we heard of the place was kinda vague and open to multiple interpretations. We heard words like “art”, “painted mountain”, “spending 28 years in the desert”, “dedication to god” . .  and much more. Enough phrases to spark our interest so we decided to go see for ourselves.

We arrived there in the afternoon and while this was October, temperatures that day still reached 99 degrees Fahrenheit. Hot! The good news here is that there were not many people about so we had ample opportunities to look around and get great pictures without battling crowds of people.

The “mountain” has two distinct areas, the main (and original) mountain and a newer addition, built after a donation of 200 bales of hay, called “the museum”.

“The Museum” at Salvation Mountain is made from car tires and dead trees, held together with Adobe Clay and paint

Inside “The Museum” at Salvation Mountain

A yellow path, called the Yellow Brick Road” lets you climb up to the very top of the mountain, which really lets you appreciate the effort it took to create this place. It also offers some amazing views of the desert, adding to the wonder and admiration of Leonard’s dedication. 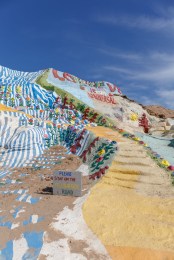 Yellow Brick Road leading to the top of Salvation Mountain

Desert view from the top of Salvation Mountain

The cross at the top of Salvation Mountain

Salvation Mountain was also featured in Huell Howser’s well known “California’s Gold” series – twice! You can see both episodes here, just scroll through to the 27:00 mark of the video.

Make sure you check out the video, if for nothing else to enjoy Leonard’s enthusiasm for his creation, his wonderful sense of humor and his obvious delight and pleasure he gets from the people that come and visit the mountain.