You go to Las Vegas to do some gambling and maybe catch a show, right? Well not always. We learned that there are many more things to do and see that have little, or nothing, to do with gambling.

In past visits to the “City of Sin”, we visited places like The Neon Museum, the Brain Institute and Red Rock Canyon, this time around we checked out Fremont Street in old Las Vegas and visited the Valley of Fire, which is just 40 miles North of Las Vegas. We were SO delighted with what we saw in the Valley of Fire, we went twice! It’s was THAT beautiful and interesting, we simply could not see it all on one day.

The Valley of Fire is aptly named as the dramatic sandstone formations that make up the park are firey red which intensify in the late-afternoon sun. As the rocks and cliffs get eroded by the elements, amazing colored patterns and shapes emerge, shapes that are continually being polished by the wind, often leaving perfectly round holes in cliffs.

The valley, located in the Mojave desert, offers many aspects that are common in places like Utah and North East Arizona and offers a variety of features typically only found there. For example, the Valley of Fire has numerous arches, not unlike those found in Utah’s Arches National Park. These arches are all carved from that red, rusty-colored sandstone that Utah is so famous for.

One of the prime attractions of the park is a feature called “The Fire Wave”, a distinctly wave-shaped piece of red-and-white-colored sandstone similar to a rocky formation, simply called “The Wave”, in Northern Arizona. While the Valley of Fire’s Wave is smaller than the Wave in Arizona, it is way more accessible – a mere 30-45 minutes easy hike. In contrast, the Arizona version not only requires a permit, it is a 4 hour hike over treacherous terrain.

We found some extremely photogenic locations sprinkled through the park, lots of color and hugely interesting canyons and hiking trails. One such trail was to a location called Mouse’s Tank, a natural basin in the rock where water collects and can remain trapped there for months. The 3/4 mile round trip hike is very easy, and passes several historic petroglyphs carved there some 3000 years ago by the Ancient Pueblo people. Finding and spotting them on the rock face makes for a fascinating (and fun) game as you go down the trail. Some are easily seen, some are very obscure and hard to make out.

End of the Fire Wave trail

Petroglyphs on the Mouse’s Tank trail 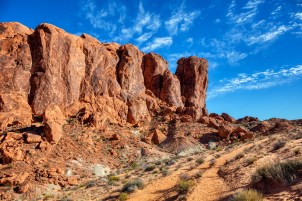 A far more recent bit of history is found just off the main road where three stone cabins stand. They were originally built by the Civilian Conservation Corps in 1930 as a shelter for travelers. This is before the area was designated a State Park, which did not happen until 1935. The three cabins each have a fireplace and an opening for a door and window, although they are now long gone. The cabins blend perfectly into the surroundings as they are constructed out of the native sandstone. The area is now a picnic area and makes for a wonderful stop and photo opportunity.

As you can imagine, the park is full of wildlife – coyotes, snakes, desert turtles, Gila Monsters (a lizard) and bighorn sheep. We did not spot anything “exotic” like the turtles or Gila Monster, but we DID see some bighorn sheep. They stopped the traffic and were nibbling at the vegetation alongside the road. They are very majestic animals when you get up close.

As a park goes, it is not too large – about 11 by 6 miles, with only one single road that goes through it. There are two campgrounds with a total of 71 sites. While no sewer hook-ups, all have water and about 20 of them even have electricity.

As compact as the park is, it is packed with lots to see and do , from hiking, photography, spectacular scenery and access to other interesting locations such as Lake Mead and, yes, Las Vegas.