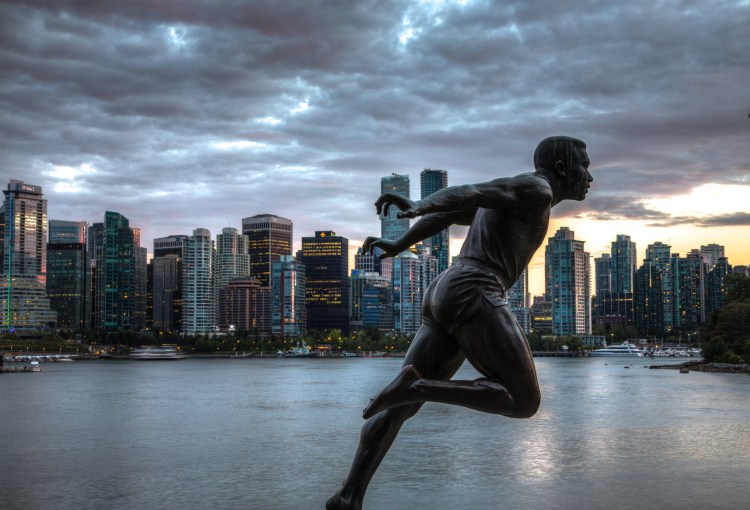 After enjoying the night photography from the top of the Seattle Space Needle, we contemplated going back to Vancouver and doing a night shoot there too.

Having visited Vancouver earlier, we knew we would get awesome photos of the skyline provided we found a good vantage point. So we spent some time pouring over maps and Google Earth and identified some locations that might work.

With that research done, we headed off, but not until around 3pm as we knew we’d stay late into the night. From Bellingham, we got to the center of Vancouver in about an hour and a half, that included the border crossing, so traffic wasn’t too bad. Downtown Vancouver however, was a different story all together, being peak hour. Traffic there was SO congested, we decided to have an early dinner and let the worst of the traffic pass.

That decision worked well and we continued our search for a good location. We first checked out Lonsdale Quay in North Vancouver. It offers views across the water to Vancouver itself and we figured that would be a great vantage point in the dark. While it was, upon getting there we realized it is a popular place with the locals. It was packed with people and there was some food truck festival going on (it was Friday evening). With so many people around, all trying to get a place to sit or stand we imagined it would be awkward to get a good shot.

So we headed off towards the second place that we thought would have potential – Stanley Park. What a beautiful park! We had already fallen in love with beautiful Vancouver and this park just deepened that feeling. The park covers the entire tip of the peninsula the city of Vancouver is built on. Despite being so close to the city, the park oozes peace and quiet. Beautiful walking and biking trails, large mature trees and dense vegetation, all of which, we imagined, was original vegetation of the area.

There is a road that follows the perimeter of the park which we followed and when we got to the most eastern tip, we knew where we’d be shooting from. Just perfect views of the city and of Canada Place with its awesome, sail-like, roof.

We parked the car and walked back and forth along the shoreline to identify the best views. Weather was perfect and there was a distinctive peaceful, mid-summer feeling in the air. While not crowded, there were people out enjoying this peaceful evening. Some were out on a casual stroll, some out for a run, others were riding their bikes or rollerblades and, of course, quite a few playing Pokemon Go.

We walked around shooting photo after photo, getting every nuance of the changing light setting as the sun was setting. Finally it started to get dark and the city lights came on. What a magnificent view! What a magnificent evening! We got some fantastic shots with pink-colored skies, awesome clouds and colorful reflections of the city over the water.

Here we are in Vancouver – Photo by Linda Norvelle

Beautiful walkway along the water – Photo by Linda Norvelle 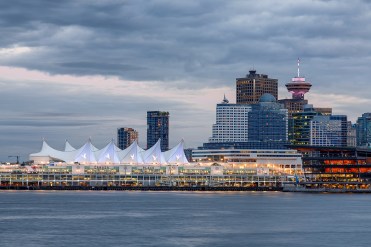 We also walked a little further around the tip of the peninsula to get a shot of North Vancouver. While the city skyline there was less impressive, we loved the view of the Lions Gate bridge, which remained us somewhat of the Golden Gate bridge.

After quite a while, we left this beautiful park and started to head back, but not before stopping by one more location! The Dome that houses the Science Museum. The dome is lit up at night and we realized we could perhaps, here too, we could get a vantage point with reflections in the water.

After accidentally running a red light (and almost hitting a biker), we found a parking spot. Turns out the area we figured would give us the best views used to be the 2010 Winter Olympic and Paralympic Village, now converted into a large residential area. It was beautiful! Fantastic walkways along the water, impressive artwork and displays, just a gorgeous area perfectly suited for a scroll along the water and, in our case, magnificent views of the Science Dome and the BC Place Stadium, which was lit up in stunning blue lights. 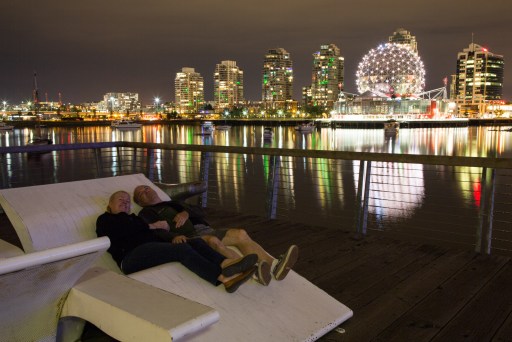 The science Dome in Vancouver – Photo by Albert de Bruijn

That night, we did not get back to the RV Park until well after 1am! But it was so worth it. We have put Vancouver on our list of beautiful places to visit and know that, one day, we will be back.